The Amazing Infosys Story How Infosys Was Born

Cite.Community - Get help, ideas or advice from seniors and your peers on everyday professional issues. 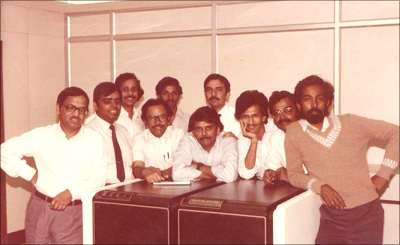 
Infosys Technologies is one of the few Indian companies that has changed the way the world looks at India.
No longer is India a land of snake charmers and beggars. It is now perceived as an economic giant to reckon with, bursting with brilliant software engineers and ambitious entrepreneurs. And Infosys is an symbol of India's information technology glory.
Infosys has many firsts to its name: The first Indian firm to list on Nasdaq; the first to offer stock options to its employees. . . The company crossed $1 billion in revenues for the first time in 2004. TCS, however, was the first Indian IT firm to top $1-bn in revenues. Infosys is an organisation that inspires awe and respect, globally. On July 2, Infosys completed 25 years in existence. This is its amazing success story, illustrated by rare photographs. 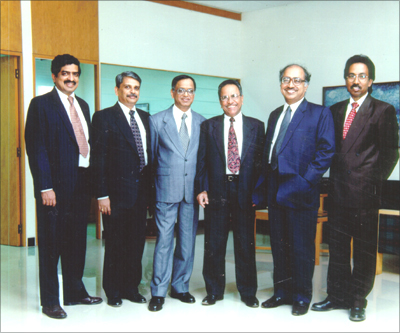 The idea of Infosys was born on a morning in January 1981. That fateful day, N R Narayana Murthy and six software engineers sat in his apartment debating how they could create a company to write software codes.
Six months later, Infosys was registered as a private limited company on July 2, 1981. Infosys co-founder N S Raghavan's house in Matunga, northcentral Mumbai, was its registered office. It was then known as Infosys Consultants Pvt Ltd.
What was the company's starting capital?
US $250. Murthy borrowed $250 from his wife Sudha to start the company. The front room of Murthy's home was Infosys' first office, although the registered office was Raghavan's home.
Who were Murthy's six friends who joined hands to launch Infosys?
Nandan Nilekani, N S Raghavan, S Gopalakrishnan, S D Shibulal, K Dinesh and Ashok Arora.
Are all of them still the founding directors?
Murthy is currently chief mentor and chairman while Nilekani is the chief executive officer and managing director. Gopalakrishnan, Shibulal and Dinesh are directors. Raghavan retired as joint managing director in 2000. He is currently the chairman of the advisory council of the N S Raghavan Centre for Entrepreneurial Learning at the Indian Institute of Management, Bangalore. Ashok Arora worked for the company till 1988 and left after selling his shares in the then unlisted company back to the other promoters. He moved to the United States where he now works as a consultant. 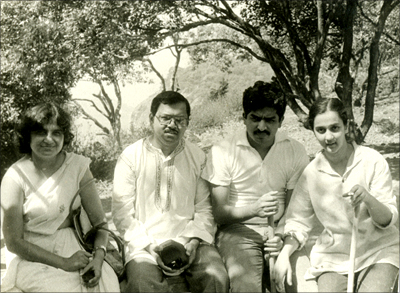 Photograph: (Left to right) Sudha Murthy, N R Narayana Murthy, Nandan Nilekani and Rohini Nilekani, a journalist at Bombay magazine before their wedding, at a picnic near Bangalore in the early 1980s.

'Murthy was always broke. He always owed me money. We used to go for dinner and he would say, 'I don't have money with me, you pay my share, will return it to you later.' For three years, I maintained a book of Murthy's debts to me. No, he never returned the money and I finally tore it up after our wedding. The amount was a little over Rs 4,000.'
-- An excerpt from Sudha Murthy's reminiscences. She is the wife of Infosys founder N R Narayana Murthy.
Those days, Murthy wanted to do something with his life, but he had no money. Murthy was married to Sudha on February 10, 1978, while he was working with Patni Computers.
In 1981, it was Murthy's idea to start Infosys. Murthy had a dream, and no money. So Sudha gave him Rs 10,000, which she had saved without his knowledge. Murthy and his six colleagues started Infosys in 1981.
No, it was not in Bangalore, but in Pune that Infosys set up its first office, in 1981. The house that Murthy and Sudha bought with a loan became the first Infosys office. As Murthy ran Infosys, Sudha took up a job as a systems analyst with the Walchand Group of Industries to support their household.
In 1983, Infosys moved to Bangalore when it got its first client, Data Basics Corporation from the United States. The first mini computer arrived at Infosys in 1983. It was a Data General 32-bit MV8000. The very next year Infosys switched from mini to main frames with a CAMP application for a Data Basics customer 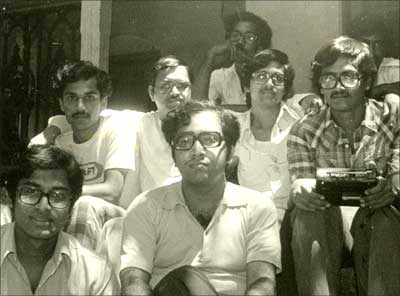 A huge struggle, day in and day out

When they began moving ahead with Infosys, the founders -- Murthy, Nilekani, Shibulal and the others -- took a firm decision -- that their wives would not be involved in the running of the company.
So after Murthy, it was Nilekani and his wife Rohini who moved to Bangalore. But they had no house to stay. So the Nilekanis stayed with the Murthys at their Jayanagar home in Bangalore.
Rohini took care of Murthy's son as Sudha helped write software programmes for Infosys. There was no luxury, only struggle, day and night. They had no car, no phone. Murthy later recalled that it was not the luxuries of life, but the passion to create something new and innovative that made them keep going on and on and on. Despite the struggles, the Murthys, the Nilekanis and the other partners took time out for picnics in Bangalore


The crisis, and how Infosys began to grow

The first years of Infosys were not smooth. Most of the founders -- Murthy, Nilekani, Dinesh, Shibulal and Gopalkrishnan -- were into writing codes. And they wanted to make an impact in the American market.
So Infosys got its first joint venture partners in Kurt Salmon Associates. Gopalakrishnan, who had spent time working in the United States, was the public face of the KSA-Infosys venture in America. But the joint venture collapsed in 1989, leaving Infosys in the lurch.
Gopalakrishnan relives the memories of those days. "We had nothing after eight years of trying to bring up a company. Those who studied with us had cars and houses," he says.
The collapse of the KSA joint venture led Infosys to its first crisis. The company was on the verge of collapse. One of the founder-partners -- Ashok Arora -- was dejected with the way the company was going, and decided to quit.
The others did not know what to do. But Murthy had the courage of conviction. 'If you all want to leave, you can. But I am going to stick (with it) and make it,' Murthy told them.
The other partners -- Nilekani, Gopalakrishnan, Shibulal, Dinesh and Raghavan -- decided to stay. And thus began to germinate the seeds of Infosys' enormous growth. 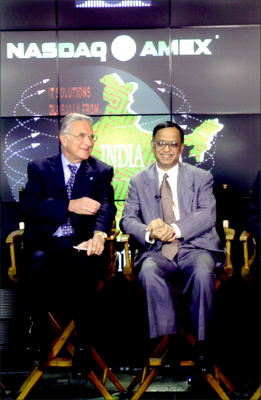 It is said that Infosys began getting big breakthroughs from the US market.
How? The initial foray of Infosys into the US market was through a company called Data Basics Corp as a 'body-shop' or on-site developer of software for US customers. Later, Infosys formed a joint venture with Kurt Salmon Associates to handle marketing in the United States.
Even today, Infosys derives about two-thirds of its revenue from the United States, serving corporate clients like Reebok, Visa, Boeing, Cisco Systems, Nordstrom and New York Life.
Infosys is the largest publicly traded IT services exporter in India, providing services to 315 large corporations, such as GE and Nortel, predominantly in the USA.
It was the first Indian company to list on the Nasdaq stock exchange in 1999.
And the other Infosys group companies?

In the last 25 years, Infosys has been growing and growing.
Today, Infosys is India's second largest software exporter. It now enjoys a strong liquidity position with over Rs 6,000 crore (Rs 60 billion) in assets, including surplus cash.
During 2005-2006, the Infosys internal cash accruals more adequately covered working capital requirements, capital expenditure and dividend payments leaving a surplus of Rs 1,612 crore (Rs billion).
As on March 2006, the company had liquid assets including investments in liquid mutual funds of Rs 4,463 crore (Rs billion). This collectively makes the liquidity strength of Infosys at Rs 6,078 crore (Rs billion).
Where are these funds parked?
These funds have been deposited with banks, highly rated financial institutions and in liquid mutual funds. Infosys last year derived an average yield of per cent (tax free) from these investments.
The company received Rs 647 crore (Rs billion) on exercise of stock options by employees and cash equivalents including liquid mutual funds increased by Rs 1,612 crore during 2005-06.
Key milestones
Year of Incorporation :
1981
Became a public limited company in India :
1992
ISO 9001/TickIT Certification :
1993
Attained SEI-CMM Level 4 :
1997
Listed on NASDAQ :
1999
Crossed $100 million in annual revenues :
1999
Attained SEI-CMM Level 5 :
1999
Crossed $400 million in revenues :
2001
Crossed $ half a billion in revenues :
2002
Crossed $ billion in revenues :
2004
Crossed $ 2 billion in revenues :
2006 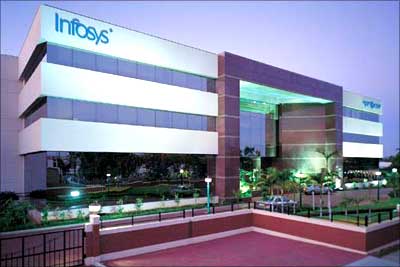 The sprawling Infosys campus in Bangalore is the symbol of India's infotech growth.
It is a campus where a company's beliefs are unique: These are the tenets that have helped India's largest software company grow into a well respected organisation.

Use factoHR and automate your HR processes

Mobile-first hire to retire HR and Payroll software that automates all HR operations and works as a catalysts for your organisational growth.

If you are knowledgeable about any fact, resource or experience related to this topic - please add your views.

Value Story Reaching Out to our team.ppt

20 August 2008 11.40.51 AM
From: United Arab Emirates, Abu Dhabi
Views: 16468 Replies: 0 Appreciations: 3
APPRECIATED THREADS IN TAG
#Iso 9001
Please let me know how to get ISO 90012008 external Auditor Certificate?
Combine lead auditor trg on qms/ isms from sep 5th at chenna
What is the qualification required to become a professional HR auditor?
#Public Limited Company
Can Same Company Registered With Company Act And Factory Act Both ?
Is An Offer Letter From The Director Legally Valid In A Partnership Firm?
Minimum wage for public limited company
#Unlisted Company
Esops In It Company - Pdf Download
Ppt About Fbt On Esops Download
Employee Stock Option Plan
#Managing Director
Signing of the Attendance Register by the Managing Director of the company?
Concurrent employment of an employee who is MD of another company
Managing Director of a company orders his HR Manager to work as receptionist in her absence
#Listed Company
Company Forcibly Giving Shares Instead Of Salary - Legal Action?
Background Verification Hiccup
Company Not Relieving Me
#Infosys Bpo
Attrition Rate
Mba-hr With Around 3 Yrs Of Exp - Doc Download
Job Request For A Physically Challenged Person - DOC Download
#Mutual Funds
Did Blunder Mistake Want To Solution
ISTD Diploma
Regarding Tax On Performance Pay / Bonus
#Software Engineers
The role and job deliverables for every employee is different so setting a KRA/KPI is very difficult
Banding System In Software Company
I Want To Prepare An Performance Appraisal System For An IT Company.
#Limited Company
Legality of Revoking Increased Salary By Company and putting me back on last years salary?
Can we pay only half or only basic salary in ML - private limited company with 40 employees in Karnataka
Is it mandatory for a private limited company engaged in Daycare Health Setup to cover its employees under ESIC?